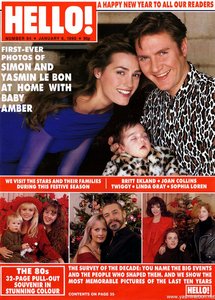 At the beginning of September, HELLO! published the first-ever photographs of Simon and Yasmin with their three-day-old daughter Amber at the clinic where she was born. Now we've visited them again to find out what's been happening in their lives and to see how Amber has developed since that day.

When we arrived, Simon was busy having his familiar ponytail chopped off, and music filled their stylish and very welcoming home. Simon and Yasmin both love this house, tucked away in Chelsea, but are well aware that they will have to move some day, when they hire a permanent nanny, as, realistically, there just isn't the space to share with a stranger.

As Yasmin feels strongly that a baby should bond to its family, they haven't started looking for anyone yet. Instead, Simon's young and very attractive mother Ann-Marie left her home in Florida to help out the young couple.

The fact that Ann-Marie once also worked in a maternity hospital is an added bonus and eases any anxieties Simon and Yasmin may have had about combining their roles as parents with their busy lifestyles. 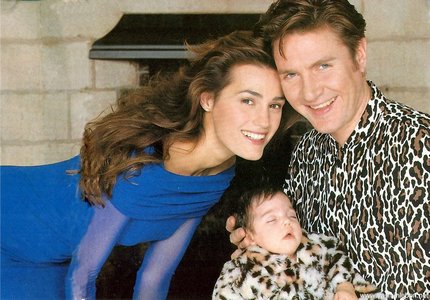 The couple are delighted with the arrangement. So is Ann-Marie who, having three sons - Simon and his brothers David and Jonathon - really thinks of Yasmin as her own daughter. And now, with her two grandchildren living in England, she's thinking of moving back here - although if she does, she says she'll keep her home in Florida as the ideal holiday place for the children.

So, with Amber in safe and more than capable hands, both Simon and Yasmin have not only managed to continue their respective careers but are doing more, professionally, than ever before. This they attribute to the birth of their daughter, who has inspired them and injected them with added energy and excitement.

Yasmin, who soon after the birth took part in the London, Paris and New York shows - also recently appeared in a cruelty-free fashion show initiated by the Lynx anti-fur campaigners. 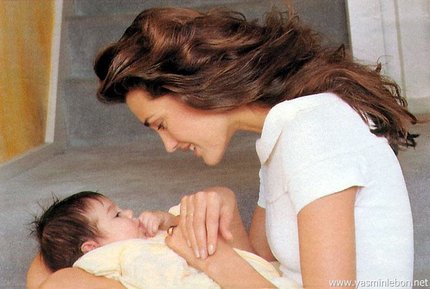 Simon has been even busier. Apart from the release of the Decade album and video - celebrating ten years of Duran Duran's existence - the band have also released the megamix single Burning the Ground, which contains 12 bits of the 14 songs on the Decade album.

Now Simon says he's getting an extra energy kick from going to the studio where the band are recording their new album that's due to be released in Spring.

As they were preparing for Christmas, we spoke to Yasmin and Simon about their work and their feelings as new parents.

Yasmin, what was the very first thing you did when you got home from the clinic with Amber?

"Give a big sigh of relief, I think! They were great in the clinic but you get fed up with someone coming in every few hours telling you to do things in a different way. I wanted to get home because I knew I could deal with Amber myself."

Simon: "The most important thing for us was to get into a routine as quickly as possible. You also have to get the baby used to being at home." 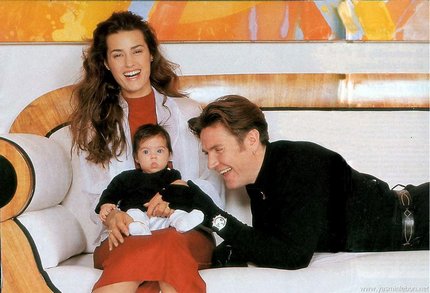 Were you inundated with visitors wanting to see the baby?

Y: "Yes, and it is the new mother's nightmare, because you're absolutely exhausted and everything is still so brand-new. Lots of people want to come round and you feel that you have to entertain them, yet you still have to take care of the baby.

"But everyone has been so generous. Grandparents, friends, even fans, have given her the most extraordinary gifts. All I had to but were three baby-gros!"

Is Amber beginning to react to things around her?

Y: "Oh, yes, she's so alert. I didn't think a four-month-old baby could be so interesting. She's funny, just like a little comedian. The things she does make me laugh all the time. For example, when we bathe her and lay her on a towel, she kicks her legs till she hits herself on the stomach, then giggles. She talks a lot too, chatters constantly. I don't know why she has so much to say, but she does!" 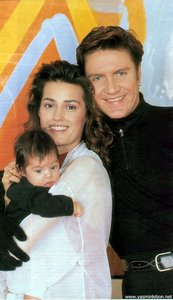 Simon's mother has obviously been a great help by coming to take care of Amber.

"I have to say she's heaven sent. To have your family with you is just so comfortable. Simon's at ease and we both have a very special relationship with her. She's a very special person."

At some stage though, presumably she won't always be able to be with you, so why didn't you opt for a permanent nanny from the start?

"I think I'd find it difficult to have a stranger around right at the start. I also think that when a baby begins to get close to somebody, it should be family. That's a natural and beautiful thing.

"When I went to Los Angeles on a job recently, I was only away three days, but they were the longest three days of my life. It was a shock. So when I had to work in New York for a week, I took Amber with me because that's a very long time in a baby's life." 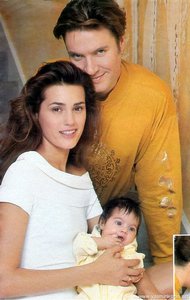 Simon, what have you been busy doing during this time?

"I've been in the studio most of the time, working on our new album to be released in the Spring. Chris Kimsey, who produced the Rolling Stones album, is producing it, and it's a major statement of my and the band's life.

"It's kind of difficult to equate that with having a new child in the house. I've got this thing I've been involved in for ten years - music - then I come home to this very special atmosphere here. There's a lot of love in the house, and it actually gives inspiration - a joy and a feeling that I can take into the studio with me.

"It's very easy to get wrapped up in the family - and sometimes I have to force myself to go to the studio, but I do because that's my job. Yasmin feels the same way when she has to leave the house. But you have to remind yourself that work, too, is part of the machinery of the family, part of the fuel and the driving energy of the family. It also supports the family, of course. We're talking about something which gives us security and so it gives Amber her future security. 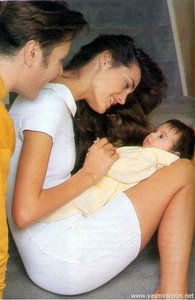 "We haven't become just a family unit which doesn't do anything else. Because of Amber, we have more energy and drive than we ever did before. Yasmin is more serious about her work and about looking good and being in shape, than she's ever been before, too. And she'd never have taken on jobs like those in America before."

Why is that, Yasmin?

"Before, I didn't want the hassle of travelling, or of leaving Simon. I would never organise things. Now my life is turned around. I've become much more professional."

And you both relate that directly to the birth of Amber?

S: "Yes. You suddenly think: I can go one of two ways now, I can either settle down with the family and end my career or I can give my work all the energy and excitement I feel now. Having a child makes you see how many more personal possibilities you have. In my case, it gives me the incentive to go and make the best record the group's ever made. It gives Yasmin the incentive to appear in the best photographs ever." 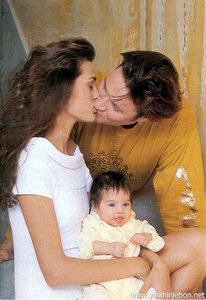 Yasmin, with your plans to travel more, how will Amber fit in?

"If I have to work in a different country for a week or more, she'll go with me."

S: "It does mean more work because you have to plan how to fit the baby in, how to keep her happy and comfortable, yet still to get on with the life and the jobs that you have to get on with. Workwise, in the case of Duran Duran, we are going to be around for another decade."

Yasmin, how do you feel about Simon's work?

"It's a major part of both our lives. I'm wrapped up in it, I always have been. I can't not be. If this man is not happy, then I'm not happy. While he's so enthusiastic and enjoys music so much, and loves being in a band which is happy together and doing great things, it also affects me."

S: "And how we feel affects Amber." 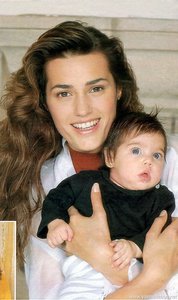 Yasmin, you seem more concerned with Simon's career than you own.

"I've always supported him. To be honest, if I didn't like what he does musically, then I would never have married the man. It's such a huge part of his life. You have to love what your partner does, otherwise your relationship doesn't have a hope in hell. So it's always been important."

Music is so obviously part of your lives and I remember, when you were at the clinic, you said you wanted to surround Amber with it. What's her reaction?

"When Simon's out of the house, we're too busy to have music on, but when we do she loves it. More so if you dance with her. She loves being around people and can't stand to think there's something going on without her!" 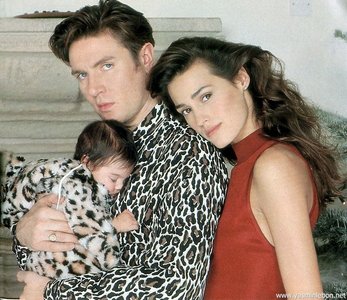 Yasmin, have you ever felt a moment of guilt for not being with Amber 24 hours a day at this early stage in her life?

"Yes, quite constantly. Your natural instinct is to be with your child all the time and if you do anything else but that, you feel guilty. But perhaps it's not guilt, but just feeling upset because you want to be with her."

But with the kind of lifestyles you both lead, have you never felt that a baby could be a bit of a handicap?

Y: "If you ever feel like that, all you have to do is pick her up and put her on your lap. The moment she smiles at you nothing else matters, everything else falls by the wayside."

S: "It means more activity. I won't say work because looking after you own child isn't work. It means you have to plan things a bit better and you have to take the child into consideration when making your plans. But we're very lucky, as we'll always have someone to look after Amber. And we can do that by maintaining our careers." 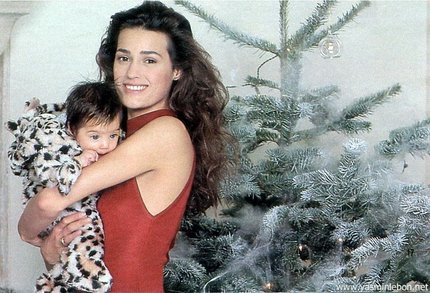 And has the experience so far with Amber made you more, or less, determined to have other children?

Y: "We're definitely going to have more. I'd never have had Amber if I'd thought she'd be an only child. I think only children are lonely and generally can be spoilt. Also, children look after each other, play, fight, love and hate together. There's always activity."

So how many more children do you think you would both like?

"I'd like three or four. But I don't think Simon's quite ready for that just yet!"

Ideally, what would you like your next child to be? 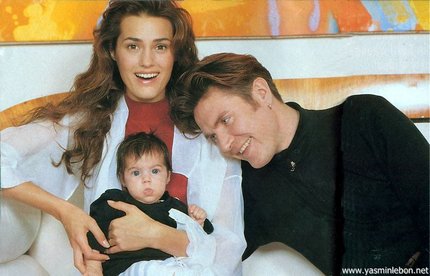 How is Simon as a father?

"He's completely besotted. I find it so touching. There are times when she's having a bath and he'll come in with tears in his eyes. He just gets so overwhelmed because Amber is so beautiful."

Yasmin, what's the main difference you have noticed now that you're a mother?

"I'm just filled with more love than I ever thought I could be. And it has made a huge impact on our relationship. Simon and I were always incredibly loving anyway, but having Amber has heightened all those emotions."